The current issue of Asympote features a very early story by one of my favourite short story writers, Etgar Keret.  The story, "Like Bats" is introduced by the author with the following words:

I wrote this story twenty-four years ago—during my three-year stint in the army, very shortly after the death of my best friend who had served with me. The bat insignia mentioned in the story was very common in my army base. Some units had lions, tigers, sharks and elephants to represent them; one had a bat. I'm sure many must have wondered why any unit would choose such a small and ugly and blind animal for an insignia but personally, I quite liked it. During my army years I've felt much more like an upside-down hanging bat than any of those proud predators in all those other units' insignias.
—Etgar Keret

It's accompanied by this piece of artwork by Hugu Muecke: 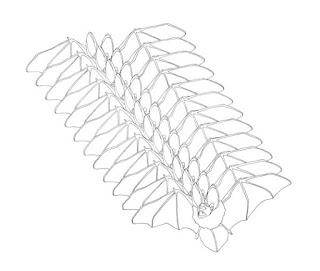 Needless to say, there are many equally interesting things on the Asympote Journal website.
Posted by Philistine Press at 09:00 No comments:

Patrick's novel Sybernika can be read online and downloaded for free from www.sybernika.com and www.philistinepress.com. 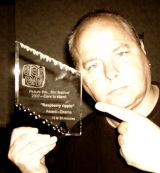 Would you say Sybernika is a pure sci fi novel, or are there elements of other genres thrown into the mix?

I think Sybernika is as pure science fiction as you can get – like one of those fancy vodkas that have been distilled three times and then filtered. In it, I’ve extrapolated a future based on current trends – societal and scientific – and come up with a future I think is entirely plausible.

Of course, the future won’t be as I imagine it. Even the best science fiction writers have proven lousy at predicting the shape of things to come. But that isn’t the point. Good sci-fi is about the present not the future.

What I’ve done with Sybernika is examine some of my obsessions and create scenarios with them. It’s crammed full of possible answers to some of the many “what if” questions that keep me awake at night. For better or for worse, the answers aren’t particularly comprehensive. Sybernika – like a lot of its characters – is actually quite shallow.

Who are your influences?

Oh gosh. Always a tricky one this. It’s a bit like working out what happened in your childhood to make you the person you are today. I mean, I’ve been writing for a very long time and have hopefully developed my own voice which means my influences are buried in the deep, dark recesses of my mind.

Would I be writing the way I am now if I’d never read anyting by – say – Edgar Allan Poe? Hard to say, really.

Back in my formative writing days, I suppose there were certain writers I tried to emulate. These would have included (in no particular order) Michael Moorcock, J.G. Ballard, Isaac Asimov, Ray Bradbury, Arthur Conan Doyle and Lewis Carroll. Hopefully there’s little or none of the Asimov influence left in me. I tried reading something of his the other day and thought the writing was just dreadful.

Not all my influences are literary. I’m sure the likes of Monty Python, Marcel Duchamp, David Bowie and Salvador Dali have left their fingerprints on my work. At least I hope they have.

Is writing as a female narrator a difficult task as a male author?

I found it shockingly easy to write as a woman. Then again, I made it easy by not delving too deeply into my heroine’s psyche. Rhiannon, after all, isn’t a real woman. She’s a computer simulation. So in a way, I wasn’t writing as a woman, I was writing as a computer.

I have no special insight into the workings of the female mind, but I do understand computers.

(This reminds me of a conversation I recently had down the pub. A lady acquaintance of mine declared that no man can possibly know what it’s like to give birth. I told her that having recently had a prostate exam I knew exactly what it was like. She wasn’t impressed.)

What is the appeal of writing a novel about virtual reality?

I was for many years a computer programmer and remain fascinated by the potential of what is still a very immature technology.

It’s kind of a cliché to talk about something representing the next stage of human evolution, but that’s how I genuinely see the computer. It gives us the god-like power to create, experience and even control our own worlds. There may come a day when people spend all their time in virtual reality, either voluntarily or otherwise. If it happens, it will be the biggest change in the way we live since our ancestors came down from the trees.

The laws of physics being what they are, it’s unlikely we’ll ever set foot any planet beyond the solar system. And – apart from the one we’re on - there’s no planet within the solar system that’s even remotely hospitable. We’re doomed to be an Earth-bound species until we become extinct. Our one true hope of exploring strange new worlds – to boldly go where no man has gone before – is to create those worlds ourselves.

Cyberspace is the real final frontier and it’s within our grasp.

Once that frontier really opens up, it’s likely to be as lawless as the old Wild West. Who’ll own what bits of it? What rights will its colonists have? Who’ll control it?

Writing about virtual reality is a fun thing to do. It’s also very relevent. In fact, the questions posed by VR’s potential may be the most important ones we’ll face within the foreseeable future.

Yes and no. I think many – if not all – of the things it depicts will come true but almost certainly not the way I’ve imagined them. Then again, there could come along something new and unexpected – a black swan, if you will – that takes us all down a road none of us could have foreseen.

There’s a story that in 1943 Thomas Watson, chairman of IBM, declared "I think there is a world market for maybe five computers".

I recall from my youth programs like Tomorrow’s World promising us that by the year 2000 we’d all have flying cars, robots would do our housework and we'd holiday on the moon. No mention whatsoever of the Internet.

Is Sybernika prophetic? Only time will tell.

How do you feel about online literature?

That’s a bit like asking how I feel about literature on papyrus or clay tablets. Literature is literature no matter the medium it’s carried on.

Then again, it’s not like that at all, is it? I mean, a clay tablet made by me here in Blighty isn’t going to be accessible to thosands of people around the world. Not unless I scan it and put it online.

Frankly, I love online literature. I love the anarchy of it. I love the fact that anyone can do it. How can that be anything other than a good thing?

All I have to worry about is how good my own work is. If there’s a lot of dross out there, it makes what I do look all that much better, so bring it on!

How long does a poem have to be before it can be labelled "epic"?  I don't know.  This is long, though.

My favourite part of this epic / long poem is:

"I’m writing this in pencil on my knee,
Using my other hand to stop me yawning,
Upon a primitive, unsheltered quay
In the small hours of a Wednesday morning... "

Full poem here.
Posted by Philistine Press at 09:00 No comments: 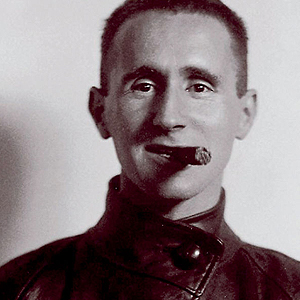 Among many other great things on ubu.com is an archive of recordings of classic Bertold Brecht plays, in English and in German.

As far as I know, these original BBC recordings can't be accessed anywhere else.

Listen to them here.

It's 1981, and there just aren't enough songs about zombies. Step up, Combo Zombo; your time is at hand. C.J. Nukem,  Mr Pie, Tiger and (erm) Chuck. Mr Pie, whose real name I believe is Adrian, would go on to win an Emmy, play with the Waterboys and drum on the Mike Flowers' Pops cover of Wonderwall. No, really. The band reformed this weekend for one gig and showed that music really can still be weird and wonderful, and strangely touching - even when the songs are about zombie girlfriends.

A massive discovery here - the online chapbook archive from Ugly Duckling Presse.  A large number of out of print chapbooks - both English language and translated works.

Great artwork too.
Posted by Philistine Press at 09:00 No comments:

Straight Outta Annan... here's The Limps. Forget 'Here's three chords, now form a band', most of this is two chords! They did things differently in 1979; however, this is when punk was real, bands formed their own labels, and they meant it (maaaan).

Here’s a link to Chapter 12 of Anemone Sidecar.

The issue is devoted to the short story Younger by Brian Evenson – the original prose version, followed by an illustrated interpretation of the story by Caitlin Skaalrud.

It’s very interesting to see two versions of the same story laid side by side.  Both are great things.
Posted by Philistine Press at 09:00 No comments:

A semi-random selection of highlights from the world of online literature...

Fantasia of an Eight-Year-Old Pianist by C.J. Arellano from The Ear Hustler

Velocity by Ofir Touche Gafla from Words Without Borders
Posted by Philistine Press at 09:00 1 comment: